Third in a three-part series about the Canadian Rockies

In touring the Canadian Rockies, there is a lot more to see than mountains.

Yes, the towering peaks are majestic and omnipresent when you travel the Icefields Parkway. Factor in the vibrant turquoise lakes, ancient glaciers and dramatic waterfalls, and the 144-mile stretch of Highway 93 through Banff and Jasper national parks validates its reputation as one of the most scenic drives in North America.

What surprised us was the abundance of wildlife to be seen without even leaving the roadway.

Within the first few miles of entering the south end of the parkway a traffic backup revealed the first black bear sighting. That was the tipoff that anytime we saw a line of taillights ahead there must be wildlife near the road.

Someone in Banff had mentioned there had been frequent grizzly bear sightings near Jasper. That proved prophetic when, just before reaching the north end of the parkway, just outside Jasper, we came upon a grizzly feeding next to the road, oblivious to the line of onlookers that had gathered.

A parks employee doing a presentation in a campground told us that bears consume up to 250,000 buffaloberries a day as they load up on a daily caloric equivalent of 65 Big Macs. They get no competition from humans in that pursuit. The wild berries taste like soap, he said.

Part 1 on summer travel in the Canadian Rockies: Banff is just the beginning

Part 2 on the Canadian Rockies: Story and photos about a Columbia Icefield Adventure excursion to the Athabasca Glacier and Skywalk viewing platform.

The highlight of wildlife viewing was the herd of mountain goats ambling along the highway about 38 kilometers (about 24 miles) south of Jasper, an area they are commonly found. Normally only seen as specks on steep cliffs, this is a rare opportunity for a close look at the docile creatures as they congregate to lick the mineral-rich deposits of calcium and sulphate on the east side of the parkway in that area. Their white coats blend in with the pale-colored silty ground that draws them from their usual lofty perches.

The parkway is a campers’ delight with 11 seasonal campgrounds. With numerous hiking trails to explore along the way, anyone with unlimited time could spend a whole summer enjoying the natural wonders of the area.

Note that a National Park Permit is required to enter the Icefields Parkway, available at entry points and visitors centers. There are additional permits for camping and campfires. Reservations are recommended to ensure a spot in campgrounds.

Short visits are thoroughly rewarding — we spent parts of four days on the parkway — because there is so much to see without venturing far from the road. 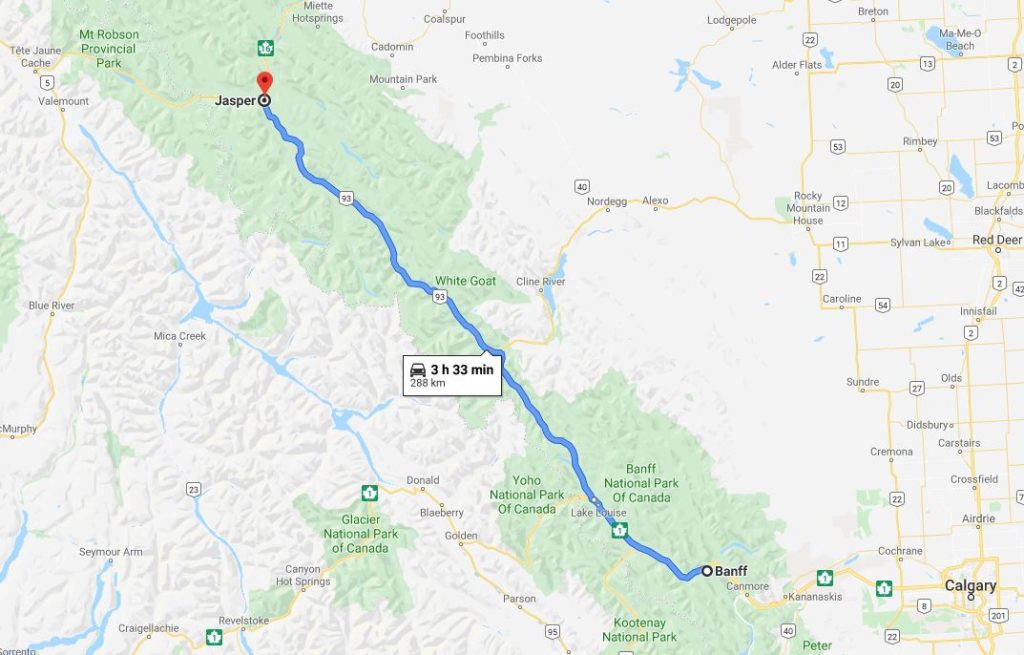 Here were our favorite stops (beginning from the south end of the parkway):

The first can’t-miss stop as you head north on the parkway is Bow Lake, and you can’t miss it. It is a jewel of a playground with vibrant turquoise water like so many of the lakes in the Canadian Rockies. The reason is these lakes are fed by glaciers, and the brilliant blue and green shades come from the rock silt that runs into them from the eroding glaciers.

There are two pull-offs to the left of the road, affording panoramic viewing and photo opportunities of the lake and Bow Summit rising from the opposite shore. The historic Num-Ti-Jah Lodge can be seen across the lake, accessible by a side road. The area is popular for hiking along the lakeshore.

A couple miles past Bow Lake is the turnoff for Peyto Lake, known as the most photographed lake in the Canadian Rockies, Peyto Lake is best viewed from Bow Summit, which at 6,800 feet above sea level is the highest accessible point on the parkway.

The sign in the parking lot says it’s an easy 10-minute hike to the summit. Be prepared, it’s more like 25 minutes of a rather steep climb, and it was buggy in July.

The most popular attraction on the parkway is the Athabasca Glacier, 62 miles south of Jasper, which draws more than 800,000 visitors a year for the 90-minute Columbia Icefield tours onto the glacier as well as viewing from the Skywalk platform near the Icefields Center.

Read about what it’s like on the glacier excursions onto the glacier here at craigslegztravels.com.

It does get crowded at the tour stop on the glacier. For a less harried experience, consider taking a small-group guided hike on the ice.

There are numerous waterfalls accessible from the Icefields Parkway. The two prominent falls in the northern portion of the parkway — Athabasca and Sunwapta — in Jasper National Park  were among our favorite stops.

We visited them on the way back southbound from Jasper, and spent a considerable amount of time at each, mesmerized by the sound and power of the rushing water fed by melting glaciers. Both are readily accessible just off the parkway and with ample parking.

View from below the Athabasca Falls, a powerful waterfalls along the Icefields Parkway, fed by melting glacier ice. (Craig Davis/craigslegztravels.com)

Parks officers on Jet Skis patrol the waters below the Athabasca Falls, a powerful waterfalls along the Icefields Parkway, fed by melting glacier ice. (Craig Davis/craigslegztravels.com)

Twenty miles south of Jasper, Athabasca Falls is impressive not for the height of the drop (75 feet) but for the volume and force of the water powering through the hard quartzite rock. A network of hiking trails, viewing platforms and stairs to different levels affords up-close viewing and prime photo opportunities of the falling waters at various angles from above and on its journey through the gorge to the river below.

Interpretive signs explain how the rushing glacier waters carved through the rock and altered course through geological eons. There is also a mystery to contemplate of why there are 14 species of native fish below the falls, but only the bull trout is found above the falls.

Sunwapta has similarities to Athabasca Falls, also fed by the glacier and notable more for the force of the water through a tight canyon than the vertical height (60 feet). The viewing area is more compact, but the surroundings are scenic, including an island of lodgepole pines amid the rushing waters.

The upper falls is just off the parking lot, and there is a lower falls that requires a bit of a trek (.8 of a mile). It’s worth the effort to get away from the crowds at the top, and the reward is a view of three elevation drops on the lower falls.

The Sunwapta Falls Rocky Mountain Lodge is at the turnoff to the falls. We didn’t stay or eat at the lodge but found a visit to the gift shop worthwhile. I purchased a colorful piece of ammolite, my one souvenir on the trip.

Don’t miss the display of Mort Graham’s portraits of prominent Aboriginal chiefs from the 1800s outside the Sunwapta Falls Rocky Mountain Lodge. The portraits are accompanied by short biographies that are undeniably heartbreaking about the fate of these leaders and their people. It’s a realistic look at the heritage of the region that you don’t usually get in tourist-driven areas.

In addition to the best-known attractions along the parkway there are numerous pull-offs that offer stunning views. One of our favorites followed a substantial ascent where we were treated to a high-elevation view of the valley we had just traversed.

Facebook’s new advertising policies have made it tougher to promote climate concerns while making it easier for politicians to make false claims. […]