There is nothing in the name that suggests Bud N’ Mary’s Marina as a hub of world-class fishing.

New Englanders Bud and Mary Stapleton reputedly didn’t know much about boats or fishing when they relocated to the Florida Keys and opened a hotel and tackle shop in 1944. But they couldn’t have chosen a more strategic spot to establish a fishing empire than the southern tip of Islamorada, which would gain the reputation as the Sportsfishing Capital.

Bud N’ Mary’s, at Keys mile marker 79.8, has figured prominently in that due to a hall-of-fame cast of fishing captains and backcountry guides that have generated an unimaginable volume of fishing history over more than 70 years. So has easy access to world-class fishing opportunities on the ocean flats, reefs and the Gulf Stream as well as the backcountry of Florida Bay.

So much fishing talent has passed through these docks, from pioneer captains Jimmie Albright and Cecil Keith to superstar anglers such as Stu Apte and Billy Pate, plus numerous celebrity fishing enthusiasts including Ted Williams and George H.W. Bush.

But my favorite Bud N’ Mary’s duo is Richard Stanczyk and Vic Gaspeny.

Stanczyk purchased the marina in 1978, has fished these waters for most of his life and has an uncanny instinct for sensing the right place and opportune time for a momentous catch. Gaspeny began working at the marina in 1970 and has guided there since ’75, which he continues to do with methodical efficiency.

The two comprise a collaboration in contrasts that continue to crank out memorable saltwater hits like an offshore Lennon and McCartney.

“We’re the odd couple. I keep notes, I try to look at all the science,” says Gaspeny, who before an outing prepares a meticulous game plan detailing factors such as tides, wind, currents, strategic times and places to help in locating whatever prey is being sought.

“Richard refers to me as a scientist, and he’s just a wild swinger that shoots from the hip. But he’s just got instincts with these things.”

That was the case when Gaspeny, with Stanczyk as his guide, reeled in a world-record 14-pound, 6-ounce bonefish on fly (12-pound tippet class) in 1985 that stood for 10 years.

“If we had done what I wanted we’d have never caught the record bonefish,” Gaspeny says. “I wanted to go to one area. He said, ‘I know where there’s a big one.’ He took me to a place I’d never been.

“Sure enough, this great, big bonefish starts nudging up on the flats. Instead of poling over where I could cast to it, he poles in the opposite direction and goes up on this lump on the flats and says, ‘He’s going to come here.’ Sure enough, we sat there a while and [the bonefish] came up there and we got him. 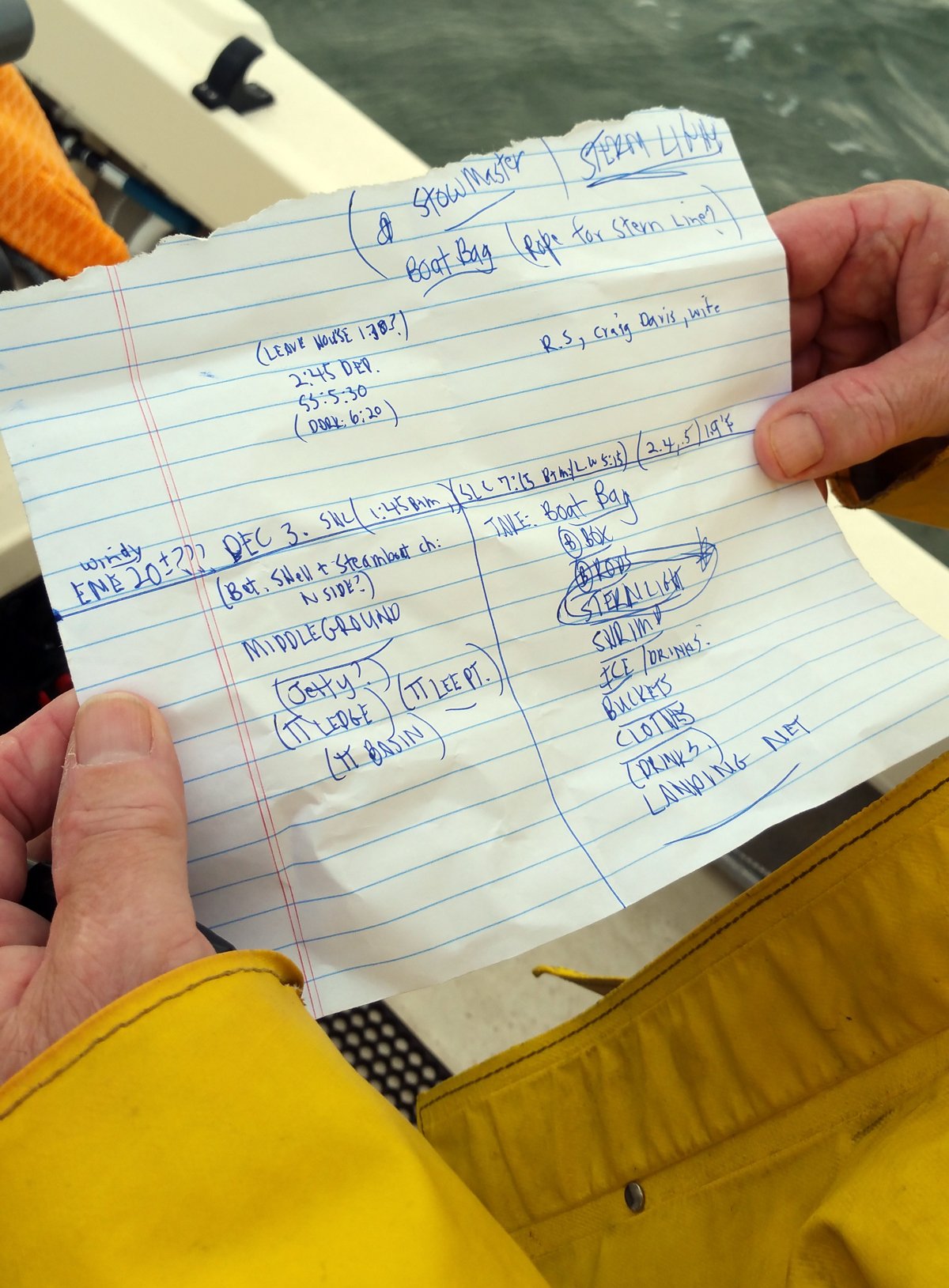 By Gaspeny’s estimation, he and Stanczyk have fished together at least 700 days and perhaps as many as 1,000. That included a 10-year shared obsession with swordfish during which they developed techniques for catching the elusive deep-water gamefish in the daytime that are now commonly used along the southern Florida coast and off the Keys.

Stanczyk has had a hand in catching about 600 swordfish, with Gaspeny as the angler on 219 of them. During a 13-month stretch from September 2006 to October 2007 they landed at least one on 53 consecutive trips.

Circumstances change. Daytime swordfishing is no longer a novelty, with hundreds of boats now pursuing them off South Florida and the Keys.

The indomitable duo has turned attention to former shallow-water pursuits, Stanczyk to bonefish, Gaspeny to tarpon.

“My life was bonefishing – fly-fishing for bonefish. About 15 years ago the water quality started to decrease and the bonefish started to disappear,” says Stanczyk, explaining why he turned to swordfish until, “I finally burned out on it. Now I developed this real interest in bonefishing again.”

From swordfish back to bonefish

The swift, powerful denizens of the shallow flats continue to be much scarcer off the Keys than in the previous century, but recently Stanczyk has had success catching larger bonefish by unconventional methods.

Most notable was one landed by his daughter-in-law, Sara Stanczyk, that measured 33 1/2 inches and may have weighed more than Gaspeny’s 1985 catch. It was a potential women’s world record, but couldn’t be considered because Stanczyk picked up the rod and handed it to Sara.

Nonetheless, it was the second bonefish of comparable size Stanczyk was involved in catching in 2016. Rather than the usual practice of poling the boat across a flat until the tail of a feeding bonefish is spotted and casting to it, Stanczyk anchors in a strategic spot, puts live shrimp out on several rods and waits for the fish to find his bait.

It sounds simple but the trick is in knowing where and when to intercept the fish. That was evident in early December 2016 when I fished with Stanczyk and Gaspeny for the first time in more than eight years since a memorable outing with them yielded three swordfish.

This day didn’t hold much promise with the wind howling and a weak tidal flow unlikely to spur bonefish on a predictable feeding pattern, as Gaspeny noted before we left the marina.

“I hope Richard prepared you for adverse conditions. We probably won’t get a bite,” he says.

But as Stanczyk likes to point out, “It only takes one bite to go from zero to hero.”

Their many years of experience and Gaspeny’s carefully prepared game plan paid off after an initial fruitless stop. Gaspeny moved the boat to another location within sight of Mud N’ Mary’s that took advantage of the wind pushing water across a flat.

Before long a fish grabbed a baited shrimp and took off on a powerful sustained dash for deeper water that bonefish are known for, headed for a channel marker a couple hundred feet off our bow. It was clear this wasn’t an ordinary bonefish when Stanczyk said, “I can’t watch this,” and retreated to the stern.

Feeling pressure to not waste what could be the only bonefish encounter of the day, I managed to stop the fish before it could run the line around the channel marker and got some line back. There would be one more long dash to withstand followed by a desperate circuit around the boat before the fish came docile within reach for Gaspeny to grab.

The bonefish, set free after a photo opp, wasn’t in the class of the one Sara Stanczyk caught, but at an estimated 8 to 9 pounds it was considerably larger than I had ever caught or witnessed.

A three-hour outing deemed unlikely to yield a bite ended up producing an eclectic assortment of entertaining catches. My wife, Fran, reeled in a five-foot nurse shark. There was also a small bonnet shark, a mangrove snapper, pinfish, two blowfish and a porgy. Gaspeny dubbed it a Super Fantasy Slam.

We were still working the edge of a flat near Bud N’ Mary’s when the big offshore boats returned flying flags signifying the number of fish caught and released in that day’s round of the Islamorada Billfish Tournament.

Meanwhile, Richard’s son Nick, who has taken over the family swordfish mantle, was on his way back from a charter trip with two broadbills on his high-speed catamaran “Broad Minded.”

All of which constituted a typical day in the history of Islamorada fishing and the fleet that operates out of Bud N’ Mary’s.

There are about 40 captains and guides based at the marina specializing in the various types of fishing available in the area.

From old school to gentler approach

In more than 45 years, Gaspeny, who has gone from being “the first Islamorada guide with a pony tail to now being the old-timer,” has seen Islamorada transformed from a sleepy fishing village to a mecca for tourists and transplants that has become too popular for its own good.

Burgeoning civilization has stressed and endangered the resources of a fragile ecosystem. Fish aren’t as abundant as they used to be. Yet the fishing and the fishermen remain topnotch, and Gaspeny points out that the latter have changed for the better in some ways.

“For whatever reason, they accumulated some really insightful fishermen there. Their dispositions weren’t as friendly as now,” he says of the Bud N’ Mary’s captains and guides who pioneered fishing in the area. “They had a lot of disdain for any newcomers. They could be hard on their customers. One writer said they offended more high-level officials, even presidents, than any group of people on the planet.”

The rough-and-tumble culture of Key West fishing guides portrayed in the early-‘70s novel “Ninety-Two in the Shade” and subsequent movie of the same name was similar to what Gaspeny observed at Bud N’ Mary’s during that era.

“They were crusty, they were a rough bunch. They were real good at what they did, but disdainful of a lot of things,” Gaspeny says. “There’s been a paradigm shift. Most of the guides now are really good with people. They have personality, are good conversationalists, they don’t abuse their anglers because they didn’t do something right. They try to be patient and explain and teach. It’s a whole different world.”

Richard Stanczyk, now 71, has ensured the evolution of the culture will continue by recently passing ownership of Bud N’ Mary’s to another duo, sons Ricky and Nick.

In addition to taking over management of the marina, the next generation of Stanczyks are also accomplished professional fishermen – while Nick, 30, builds a reputation offshore running swordfish charters, Ricky, 34, has made his mark as a backcountry guide specializing in tarpon – his clients caught an average of about 1.5 per trip in 2016.

“Bud N’ Mary’s has always provided really quality fishermen,” Gaspeny says. “They have a feel – and Richard really improved on it – for matching a customer’s needs with a guide or captain most likely to mesh with them.

“They have a gift for making people happy.”

A canceled flight that led to an unplanned road trip from Phoenix to San Diego provided an eye-opening journey through a wide range of desert terrain. Throw in the quirky Space Age Lodge and an army of wind turbines, and the trip had an otherworldly feel. […]

A whirlwind Colorado ski tour of five major resorts in eight on a 400-mile loop provided premier skiing and quirky side trips. […]

The drag queen shows at Lips Fort Lauderdale have been a hit for nearly a decade. The Dragalicious Gospel Brunch proved spiritually uplifting with a winning combination of high-energy entertainment and plenty of good food and drink. […]