It was before dawn, early January in sub-zero Edmonton, Alberta. Toasting the end of a three-city tour reporting on the Florida Panthers amid a rare streak as the hottest team in the National Hockey League, I took the first sip of a Bloody Mary and glanced up at the TV in the airport lounge.

News is ubiquitous now. There are few places to dodge it or delay it, even in remote outposts like western Canada. Particularly sad news, and this went right to the heart of a rock and roll soul.

The face on the screen was David Bowie, dead at the age of 69.

The first reactions are: That’s way too young; didn’t even know he was ill. Then the reality sets in, his was the fresh face and the voice of your own generation. Ziggy Stardust was my anthem through one year of college.

The year 2016 will be chronicled foremost for political discord and a U.S. presidential election like no other. All of that, though, is just preamble for an uncertain 2017 and beyond for the country and the world.

I will remember it for the extraordinary exodus of prominent figures, particularly in various fields of entertainment. Too many of the faces and voices that made culture vibrant departed way too soon during an unsettling and tumultuous year.

Remember when celebrity deaths tended to come in clusters of three, and after the first two you’d speculate whose demise would complete the sorrowful trilogy?

In 2016, the obits came like a tsunami, the tributes for one fallen star washing over those for another still being circulated.

As the trend rolled past Christmas toward year’s end, with actress Debbie Reynolds following a day after daughter Carrie Fisher, someone on social media speculated that Bowie had spent the year recruiting the brightest luminaries for his superior alternative universe.

Dr. Laz & the Cure, above, expressed a fitting sentiment for 2016 at a Chanakuh celebration in Lauderdale-by-the-Sea.

But there were many more. See a more comprehensive list below.

News about Prince found me on a plane bound for San Francisco while covering a Miami Marlins trip to the West Coast in April.

On another Marlins tour in June, I watched in a Phoenix hotel room as Muhammad Ali’s funeral procession wound through Louisville on its way to an inspiring memorial service.

Ali’s departure was another that stirred memories from early in my own life, including listening on my transistor radio when the soon to be self-proclaimed Greatest shocked the world by “whupping” the supposedly invincible Sonny Liston, and later of writing about an appearance he made in Miami Beach in the early ’90s.

In December, we sent a final godspeed to John Glenn, whose 1962 orbital flight will be forever etched in my childhood memories.

But the one that was most difficult to grasp, because it struck closest and was the most senseless, was the death of the Marlins’ talented young pitcher Jose Fernandez in a boating accident in September.

I had covered the charismatic Cuban defector since his remarkable emergence in the major leagues in 2013 as a 20-year-old wunderkind. The tale of his dramatic escape by boat at night from his native country was fun to tell and captivated Latin-dominated South Florida along with his brilliance on the mound.

A vibrant story just unfolding ended inexplicably in an irresponsible night of partying with two others during a joy ride near South Beach when the fishing boat Fernandez owned struck the rock jetty at high speed in the dark outside the Port of Miami.

The sudden death of the young athlete whose future prospects seemed unlimited, along with two other men also in their 20s, cast a pall over the region. His sendoff, which began at Marlins Park surrounded by mourning teammates, and other tributes were heart-wrenching for the whole community.

Jose Fernandez distinguished himself in quest for freedom, baseball stardom

I had just sent off a story to a baseball magazine that intended to honor Fernandez as the Comeback Player of the Year for his recovery from elbow surgery to regaining prominence as one of the best pitchers in the game. The award was one of several he would receive posthumously, and the story was published with revisions.

Months later, I still think of Jose every day. His death still seems surreal and difficult to accept.

My thoughts drift to a memorable interaction with him before a game in San Diego in mid-June. It was his first time back to Petco Park, where his right elbow had given out in May 2014.

Asked if it was difficult to revisit the site of that setback, Fernandez said, no, what stuck in his mind was a mundane memory from his first visit to the home of the Padres when the Marlins played there during his rookie year in May 2013.

Before one game he had sought a quiet spot to make a phone call in a storage room adjacent to the visitors’ clubhouse. While talking on the phone he happened to notice a sports bag on a shelf commemorating the 1992 MLB All-Star Game the Padres hosted at their previous home, Jack Murphy Stadium.

“It spoke to me because it was the year that I was born,” Fernandez said. “So I took a picture of it and I put it on my phone.

Fernandez then led me to the storage room and found the same sports bag in the same place on a shelf. It belongs to David Bacharach, the Padres’ visitors’ clubhouse manager, who received it for working at that game.

Jose obliged my request to pose for a picture with the bag. A month later he returned to Petco Park and pitched in the 2016 All-Star Game. One week before the end of the baseball season he was gone.

Every year has many layers, a mix of good with the bad.

On a personal level, there were the weddings of both of our children. Travel for work took me crisscrossing the continent, including a unique opportunity to cover the first major league baseball game on a prominent military base at Fort Bragg, N.C. There was also a pleasure trip to New England in the fall.

There were many laughs, much to be thankful for. But much was lost. And much to be concerned about entering 2017.

Fran and I have made a practice of observing the turn of the calendar amid the holiday lights and music at our favorite beach enclave at Lauderdale-by-the-Sea. This time we decided to usher out the year two days early. 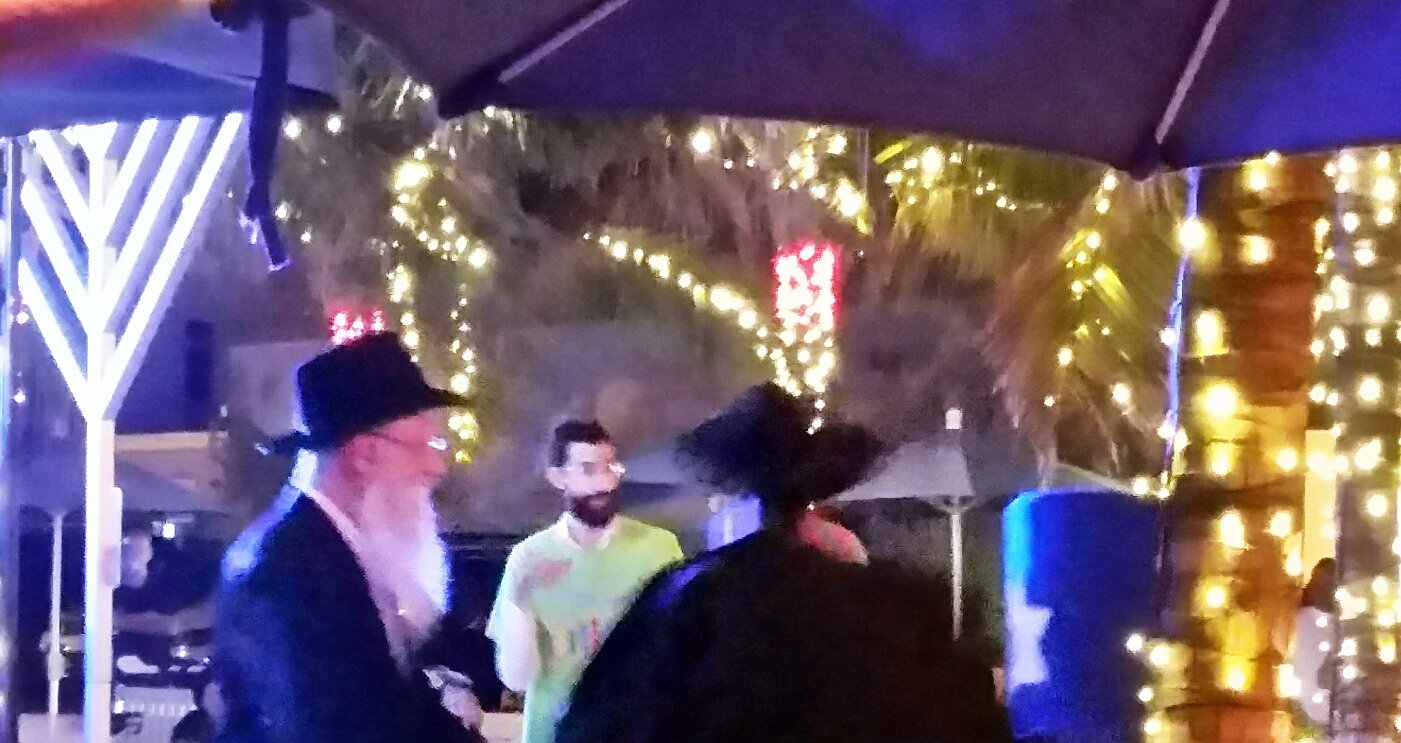 The holidays are always festive there, and on this occasion we came upon a local Chabad group celebrating Chanukah by the sea. The band playing at the seaside pavilion, Dr. Laz & the Cure, was outstanding, so we stayed for the show.

Thus, my parting image of 2016 was of joyous Orthodox Jews dancing with someone in a dreidel costume to the band’s energetic rendition of “Back in the USSR.”

We lingered until the group signed off with the classic doo-wop tune “Stay.”

It was a sentiment I wished to convey to too many who left us too soon this year … Oh won’t you stay, just a little bit longer …

As for the year, please go.

25 – Arnold Palmer, Golfer – One of the greatest golfers ever, did more to popularize the sport than any other golfer – age 87

15 – Craig Sager, Sports Reporter – best known for covering the NBA and for his loud suits – age 65

Father and daughter make a memorable pilgrimage to Boston for a weekend of baseball and beer In the summer of 2007, when the Red Sox were on the way to their second World Series championship in four seasons. […]

Covering the Fort Bragg Game between the Atlanta Braves and Miami Marlins provided an enlightening opportunity to interact with service men and women at work on the nation’s largest military base. […]

The Miami Marlins have high hopes for 2015, but their season got off to an embarrassing start when they had their first rain delay at Marlins Park when the roof didn’t close in time. […]